It is good to see the DNC trying to shed a little light on these nut-fests.
It was wishful thinking that the fringe conservative cranks would have the foresight of their poster mother Sarah Palin to bow out of politics and return home to their humble grumblings over processed foods and slackjawed screenings of 24. However, the latest exhibition of white trash mobs leave little doubt that we’ve not seen the end of this disaffected bunch.

Easily roused by their gascon champions of the airwaves, these dunderheads seek out rallies and town hall meetings to rankle politicians and call attention to their pet issues. They bleat, croak and even growl about Obama’s birth certificate. They squeal about “socialism” taking over the country. These disciples of grandstanding blowhards rant and rave as if their long-sought rapture was actually at hand.

They are blinded by their own ignorance. They can’t see how they are being used, conveyed to rallies, to merely oppose for the sake of opposition. They are the fanatical puppets of Washington’s greediest corporate lobbyists. They are the pawns in the assault to maintain the status quo.

They envision themselves as patriots but they are merely sycophantic crackpots who sabotage legitimate discourse and debate by simply cranking up the volume and vitriol of their idiocy and rancor.

Thankfully this is only a marginal group. Like their counterpart whack jobs on the far left they don’t constitute a majority. Despite their intensity and bitterness they are about as effective as Sarah Palin has proven to be (wink wink, snap, tongue-click, point!)


It seems like only yesterday we were talking about candidate’s third grade essays and their political implications. Ah, gone forever are those halcyon days of silly season – only a few months, but so so long ago. This week there has certainly been a change in the seasonal winds. Temperatures on the campaign trail have plummeted as the tone has turned bitterly cold. This week has been reminiscent of Orwell’s Hate Week, a systematic campaign designed to solidify rage and abhorrence against “enemies of the Party”. It is a short and slippery slope from hate rallies to Krystallnacht – out and out violence and destruction in the streets

John McCain is old enough to understand from history what can happen when rage seethes unchecked. He remembers the lunatic-days of Fascist Europe and Red China. He remembers the blind fervor of America’s own Red Scare that ruined the lives of so many. He knows the damaging power of frenzy. However, the cat is out of the bag and he seems powerless to contain the ire of his supporters. To his defense, he has tried to rein in the ignorance and acidity of his crowds. Yet, they boo him, ignore him. They want to hate no matter what their candidate may say. Sarah Palin on the other hand seems eager to nourish their rage. A day after McCain tried to regain his crowd back under his control, Palin further riled hers with cruel suggestions that Obama is a baby-killer. The crowed bayed their utter contempt.

History can teach us that these hate-mongers are in fact a minority of the larger community, yet their opinions win the day. They are loud, aggressive and tend toward violence. They intimidate the majority into keeping silent or even following along. Present day Germans still carry the shame of the silent masses of their grandparents’ generation. Literature demonstrates that dissent may exist in individual hearts within a state-controlled mob; yet social pressures overpower personal disquiet. Winston and Julia, in Orwell’s 1984, both secretly revile the socially imposed “Two-Minute Hate” sessions. Yet, they participate and even quietly critique each other’s degree of demonstrable vehemence. Our society is becoming reflective of these examples. For the past decade, we have gravitated to radio and television programs where hosts and audience members scream over each other, fed by a common hate for a common enemy. To publicly shout out your rage somehow makes you more loyal, or more honorable, or more knowledgeable than your neighbor. It continuously ratchets up the impassioned disdain for the other side, until any common ground is completely eradicated from the equation. These periods creep up throughout history – moments when public furor is stoked by rage for a common political goal. The French and American wars of revolution. The Bolshevik Revolution. Hitler’s holocaust. Stalin’s purges. Pol Pot’s genocide in Cambodia. The Balkans. Rawanda. Darfur. It continues, regardless of ethnicity, geography or culture. For all of our beauty and brilliance, this is one of our more sordid human characteristics. An angry man can be rational. An angry crowd? Don’t hesitate. Turn and run. 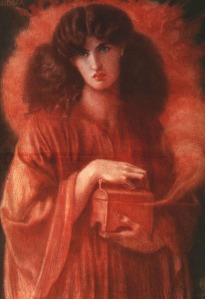 History and Literature offer glimpses into our future. So does mythology. During this dizzying descent into chaos and ire demonstrated at McCain/Palin rallies, we are reminded of Greek Mythology. Sarah Palin resembles a young Pandora. The powerful gods sought to punish humans for Prometheus’ crime of stealing fire. So, they decided to create a woman from the Earth. Unquestionably, the ancients had misogyny issues. The referred to her as a “beautiful evil” but they named her Pandora. Each god bestowed upon her a unique“gift” and placed it in a gilded box. Of course we all know what happened then. Driven by curiosity, Pandora peeked inside the box and let loose all the evils of the world. Greed, vanity, slander, envy and pining spread throughout the world and changed our lives utterly and eternally. Talk about a bad first impression.

As soon as she took the national stage at the Republican National Convention, Palin cranked up the ire. Her introductory speech went beyond the cynical sarcasm typical of any political forum. Her words were rude, belittling, cruel and bitter. And her audience lapped them up like mad dogs. Moreover, Palin clearly set the tone that night for their campaign, culminating with the rallies we see now in the closing weeks of this race. Our new politician on the scene has let loose all this ugliness and now its fire spreads. At these events people arrive armed with ignorance and vile. They call Obama a terrorist, yet can’t explain why they think that. They inaccurately call him an Arab thinking this is synonymous with evil. They have let their minds and their fears run amok. Like all fires, they feed off one another until nothing remains but destructive heat and smoldering ash. McCain cannot control them. He cannot apparently control Palin either. His base has overwhelmed him and he must feel the shame of allowing the creation of this Hydra. Palin controls the crowds now. She stokes the flames of hate and seems hell-bent on burning down the house with everyone in it.

But, remember the mythology. All was not lost when Pandora’s box was opened. Elpis remained to comfort and illuminate mankind in this sinister, dark new world. Elpis was the spirit of Hope. And for all this spreading ugliness, slander, envy, greed and all, we have a clear source of hope in this election. Will we make the right choice?

Error: Twitter did not respond. Please wait a few minutes and refresh this page.